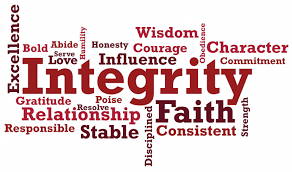 Daniel, Esther and Joseph all had specific traits that allowed them to succeed and thrive in the marketplace. In yesterday’s blog, we looked at how they all developed and sharpened their gifts and abilities to the point where they stood out from among those around them. Let’s look at another trait that they all displayed.

They had a reputation of Integrity

Even in the most adverse situations Joseph kept his integrity. He was sold by his brothers to slave traders, lied about and thrown into prison. All the while he kept his faith and lived according to God’s values which guided him into making right choices.

Esther understood what was required of her and served the king well. In spite of knowing that her own life was on the line, she stayed true to the assignment and gained favor in the sight of the king.

Daniel stayed true to who he was and what he believed. He didn’t walk around shouting from the roof tops that he was a believer, but he steadfastly and uncompromisingly stood by what and who he believed in. It was evident in everything he did.

What is the reputation that follows you? Is it one of integrity? Even while you wait on God to move you further into purpose, integrity will cause you to use your time wisely. You might not like the job that you are at right now, but still do your best and work honestly and excellently. Your reputation will proceed you and cause others to ask for you personally, just as it did for Joseph and Daniel.

What other traits can you identify that will cause you to succeed in the marketplace? Leave your comments and questions below!

One thought on “Succeeding in the Market Place Pt. 2”